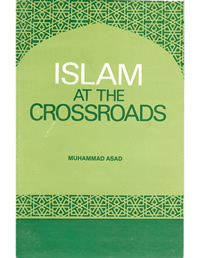 Excerpts from the conclusions of Islam at the Crossroads by Muhammad Asad.

“Islamic culture has had its splendid rise and its blossoming age; it had power to inspire men to deeds and sacrifices, it transformed nations and changed the face of the earth, and later it stood still and became stagnant, and then it became an empty word, and at present we witness its utter debasement and decay. But is this all?” . . . .

“What appears to be the decay of Islam is in reality nothing but the death and emptiness in our hearts, which are too idle and too insensitive to hear the eternal voice.No sign is visible that mankind, in its present stature, has outgrown Islam. It has not been able to produce a better system of ethics than that expressed in Islam; it has not been able to put the idea of human brotherhood on a practical footing, as Islam does in its supra-national concept of the ummah; it has not been able to create a social structure in which the conflicts and frictions between its members are as efficiently reduced to a minimum as in the social plan of Islam; it has not been able to enhance the dignity of man, his feeling of security, his spiritual hope – and last, but surely not least, his happiness.” . . . .

” By far the most important feature of our present-day condition is to be found in the intellectual and social spheres: in the disappearance of our belief and our creativeness and the disruption of our social organism.” . . . .

“Our first step must be the shedding of that spirit of “apology” for Islam, which is only another name for intellectual defeatism: only a masquerade for our own scepticism. And the next stage must be our conscious, deliberate following of the Sunnah of our Prophet. For Sunnah means no more and no less than the teachings of Islam translated into practice. By applying it as an ultimate test to the requirements of our daily life we will easily recognize which impulses from Western civilization might be accepted and which ought to be rejected. Instead of meekly submitting Islam to alien intellectual norms, we must learn – once again – to regard Islam as the norm by which the world is to be judged.”  . . . . .

“But only if we regain our lost self-confidence can we expect to go forward once again . Never will the goal be reached if we destroy our own social institutions and imitate a foreign civilization – foreign not only in an historical or a geographical sense but also in the spiritual one. And the way has been pointed out to us in the words of the Holy Our’an:

“Verily, in the Apostle of God you have a good example for everyone who looks forward to God and the Last Day” (surah 33:21)”

My most Recent Posts

What you found interesting

Tools for de-programming required to cleanse our minds, hearts and souls of Eurocentric worldviews created by Western education

A Library of Literary Interestingness

Media for Justice and Peace

All the junk that’s fit to debunk.

The Story's Story
Be Free 2 Love

The meaning of life

Experiences of a Muslim traveller across cultures