What divided us and uprooted our sanctity of unity is older than we might believe it to be:

“. . . — that the diversity of men in religions and creeds, plus the disagreement of the Community of Islam about doctrines, given the multiplicity of sects and the divergency of methods, is a deep sea in which most men founder and from which few only are saved. Each group alleges that it is the one saved, and “each faction is happy about its own beliefs.”

What then started all this divergence and can it be said the beauty of religion? I don’t buy this argument of seeing beauty in disagreement. It has led us here and one cannot simply remain aloof to the predicaments of our society that this disagreement has brought. The problem is as old as our own history and its solution cannot be a mere modern interpretation of lexicons. The grandeur of the mistake must inspire us to delve further into our own beliefs. In the past we must seek this mistake and correct it so that we don’t founder in building our future. 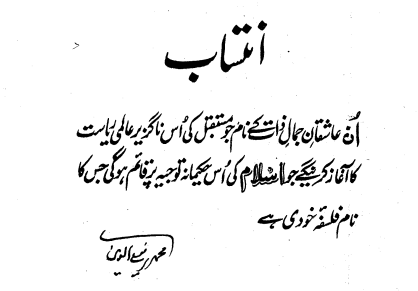 [Roughly translated as: To the lovers of beauty of the being (God), who in future will find the inevitable universal state based on the Islamic proposition of the philosophy of khuddi (human self-consciousness)]

Just read this article written by Dr. Muhammad Rafi-ud-Din. He outlines in it the philosophical rhetoric about the motives of education and has critically examined theories put forward by McDougal, and Percy Nunn. He is of the opinion that the purpose of education is not merely to build a “character” or to prepare an individual to “spend” his life rather, its purpose is to impart in an individual a complete code of ideology. The “ideology” he states has deepest implications on an individual’s life and the life of community which he is a part of.

He then probes into the matter of different ideologies (Capitalism, Socialism) that are the result of particular forms of education. He argues that these ideologies are the result of educational system of the particular peoples of these places. There is a right ideology and there is a wrong one and there is a need to be aware of the two. According to Dr. Rafi-ud-Din there is no way for an individual to know whether he is right or wrong as long as he is a part of that particular system. As there is no way to judge when there is prejudice. The solution he suggests is to rediscover the purpose of education, as every ideology strives on its educational system. He discusses the biggest problem faced by the western thinkers of education and states that they are concerned about matter only and resultantly they have attributed human development to be a mere extension of instinctive abilities of animals. Therefore, they are deluded in the present state of affairs where they don’t find appropriate to “impose” any “ideology” on the individual. This is the flaw of western educational theories as we as Muslims already have an ideology.

He then moves on to assert the Islamic ideology of education that it is based on the belief that reality of humans is through khuddi (human self-consciousness). He suggests to the philosophers of his time that if they accept this world view all their problems related to human sociology can be resolved. He then stipulates the things needed to have a healthy khuddi which should be the goal of Islamic education. Like healthy nutritious diet is needed to protect the body against physical illness, so does mental protection of khuddi is needed to protect the body from psychological illness. The diet for khuddi is love for a concept of beauty. The more beautiful one’s ideology is, more flourished there khuddi will be. Beauty is the nourishment of khuddi. He is of the opinion that different nations have different ideologies that they deem beautiful and are in love with them. Although there is partial beauty in those ideologies but the completion of this beauty cannot be achieved without God. God is the supreme beauty, he concludes, and the purpose of all knowledge is to discover the wholeness of His beauty.

It is inevitable for the people, who believe in an ideology, to form a communion and live their lives according to that specific ideology. If people who are in love with God’s beauty come together, the result will be the formation and following of universal principles of ethics, desire for knowledge and art. He then sees the decadent state that Muslims are currently in and he sees education as a decision of life and death for Muslims. In final pages he has iterated the example of dialectical materialism of Soviet Union. He has stated how their ideology forms the basis of their educational system and how it is flawed. He is of the opinion that Islamic ideology is a belief just like any other ideology and Muslims have the right to follow it just like other nations are following their ideologies.

It is an interesting read and you will be amazed by the thoughts of Dr. Rafi-ud-Din on education. He has written extensively on this subject in his book, “First Principles of Education”.

Millennials have gone all out in search of liberty and in that battle have lost something; nourishment of the spirit. They are concerned with achievement, goals, and success that revolves around things that are material. In these life-long quests they have forgotten about the unseen emotions, feelings and beliefs that are essential for souls like the air for breathing.

There are tons of applications used by millions of millennials like me to accomplish variety of tasks but happiness eludes us. It seems like happiness has become a holograph, you try to grab it and it is nothing but thin air. Why is that? Why can we not be happy about ourselves and our work? The answer is simple: we are not getting enough spiritual nourishment that brings out our happy ‘self’, we are not feeding our souls right.

The essence of delightful soul rests in sacrifice. Once Rumi said “little by little wean yourself. This is the gist of what I have to say”. Weaning carves a character out of a person who is content. Contentment is not synonymous with inaction rather it is the ability of seeing the path and treading it with patience no matter what comes ahead. This is the sheer result of a well-nourished mind that is bound to achieve ‘happiness’ in life whether it achieves or fails.

“One must first learn, unmoved, looking neither to the right nor left, to walk firmly on the straight and narrow path, before one can begin ‘to make one’s self over again.” Habit – William James

Balance comes when we give our minds a taste of our own yearning. ‘Will’ requires this balance and it is nothing but a conscious control of our self; weaning away from things that don’t matter but always seem to matter. When we change our self, slouching towards a new path, we come closer to treating our minds with satisfaction of finally doing what we really wanted to do. This way of ‘changing’ for the better is the essence of gratifying our souls with all kinds of tasty flavors of contentment and a strong will power that is the source of all action and beauty.

We are here because of our collaboration and we were not alone in it. The sum of human history is the product of people working together with zeal and zest.

“Happiness is only real when shared” Into the Wild – Christopher Mccandless.

So sharing, communicating, connecting, and collaborating minds are the result of a healthy ‘mindful’ diet. We need to join hands in building a bright and worry free future of our generations and when we make ourselves join hands with other people we are nourishing our character and of those ahead of us.

My most Recent Posts

What you found interesting

Tools for de-programming required to cleanse our minds, hearts and souls of Eurocentric worldviews created by Western education

A Library of Literary Interestingness

Media for Justice and Peace

All the junk that’s fit to debunk.

The Story's Story
Be Free 2 Love

The meaning of life

Experiences of a Muslim traveller across cultures